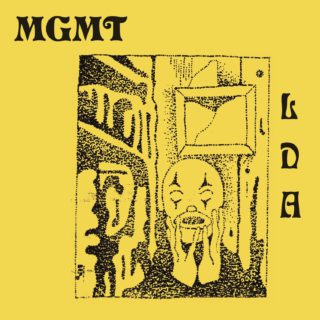 Over the last few years, MGMT have been a band in malaise. A decade on from the success of their 2007 debut ‘Oracular Spectacular’ they’re (admittedly) still recovering from the lukewarm response that followed their unexpectedly experimental follow-ups. ‘Congratulations’ in 2010 and the self-titled ‘MGMT’ in 2013 both dispensed with the woozy, psychedelic pop appeal that elevated uni mates Andrew VanWyngarden and Ben Goldwasser to mid-noughties sweetheart status, and although this latest effort, ‘Little Dark Age’, does little to return to those halcyon days of neon tie-die, it does feel like a response to that discontent.

Now, both in their mid-30s, it’s unlikely VanWyngarden and Goldwasser expect to hit the heights and hype of their mid-20s but ‘Little Dark Age’ puts some of their disaffection to work with tongue-in-cheek songs about death, blowing out brains and telling people to go fuck themselves. With half the album written to an impending backdrop of Trump’s America, there’s the odd reference to that Mango Mussolini but the general unease also lives in titles like ‘Days That Got Away’, ‘One Thing Left To Try’ and ‘When You Die’. It’s not quite the tortured words of Elliott Smith or (presumably) as morbid as they’re making out but MGMT have been affected by the preceding years—and ‘Little Dark Age’ is the reaction.

On it, they take aim at social media and the screen-glued hordes who can’t prise themselves away from their mobile on ‘She Works Out Too Much’ and ‘TSLAMP’, create a Manson-esque ditty of hostility on the scything but smiling ‘When You Die’ and, in an odd bit of serendipity, evoke SFA’s ‘It’s Not The End of the World?’ on Trump-inspired closer ‘Hand It Over’.

It’s also an album that speaks to a shift in dynamics – with the pair initially working on music separately via email before coming together to write the album – and the idea of long-term friendship adapting to time, age and geography. As a point of contrast to MGMT’s previous work, you feel that distance but among the reflection, lamentation and societal commentary, there’s still some levity on tracks like ‘James’ – an ode to the friendship with their live guitarist, James Richardson – and the soft, misty-eyed melody of ‘Me and Michael’.

The result is an affirmation that MGMT don’t feel as electric as they once did, but even after a few dissident years, their sense of hope is no less diminished.