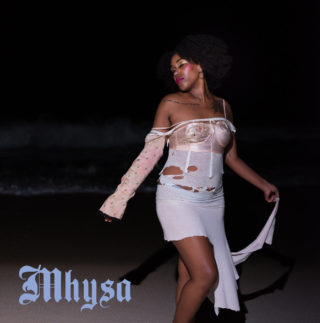 The internet births legions everyday with vague claims to the onerous title of “the new popstar”. Few make as strong a case for themselves as MHYSA. With 2017’s fantasii, the Maryland RnB abstractionist approached ’90s production like a bedroom studio, feeding cyber resistance and queer black femme culture through glitter-encrusted filters, scant percussion and mournful synth washes.

Curiously, all the remarkable austerity of NEVAEH, which flits between the voice memo-core reprises of ‘when the saints’, the skeletal trap self-discovery of ‘w me’, and the hard atonal synth blaaams of ‘no weapon formed against you shall prosper’, draws tantalising links between liberations: racial and, more often than not, sexual. MHYSA strips ‘ropeburn’ by Janet Jackson bare, transforming a lusciously lurid celebration of BDSM into a droning torch song nestled somewhere between Julie London and a Godspeed You! Black Emperor ambient passage for 5 minutes. More often than not, she is an artist who delights in discomfort, igniting in this particular instance a deeply unsettling psychosexual re-contextualisation between consensual kink and – hear me out – the history of lynching in her native American South.

Regardless, her taste for the unexpected proves her vitality among contemporary avant garde creators drawing a tantalising link with pop stardom. NEVAEH may not have the bangers of fantasii, but MHYSA proves she doesn’t need a hit to stake her claim.