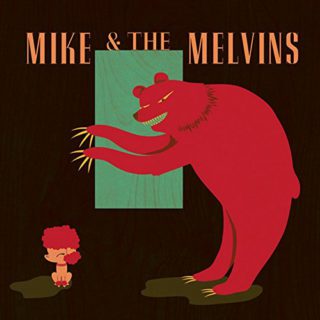 Over 16 years ago godheadSilo's Mike Kunka and The Melvins collaborated on an album - last year they got together and finished it.

Sixteen years in the making, ‘Three Men And A Baby’ is the afterbirth of a collaboration between Mike Kuna (of godheadSilo fame) and The Melvins. It was conceived (and partially finished) in 1999, only to end up on the shelf for the best part of two decades when the alt. supergroup got halfway through recording and – by all accounts – gave up. If you’re a fan of the The Melvins grinding riff-led doom rock, then this will feel worth the wait, with more than enough gristle to satisfy diehard fans on tracks like ‘Chicken ‘n’ Dump’, ‘Pound The Giants’ and ‘Bummer Conversation’, although the real highlights are the sludgy sea shanty of ‘A Dead Pile Of Worthless Junk’, the heavy blues of ‘Dead Canaries’ and the funereal fervour ‘Gravel’.

Unfortunately it’s an uneven affair. Tracks like ‘A Friend In Need Is A Friend You Don’t Need’ edge into Spinal Tap territory, while their deeper forays into speed/death metal on ‘Art School Fight Song’ are frankly interminable. Ageing, raging fans of Washington punk will be thrilled to know the dream lives on; for everyone else it might as well be dead.