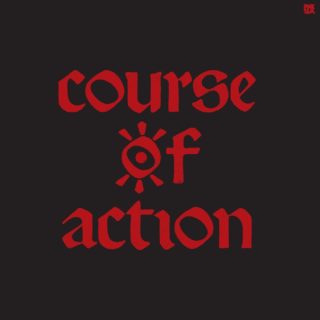 “We wanted to get an album down quickly,” Mind Rays guitarist Christophe Adriaensens explains in the release note for his band’s new LP. “Even if it sounds like a cliché – we wanted to sound and feel like we do live.”

Well, if that’s what the Belgian punks were going for on Course of Action, then I have to say, mission accomplished. This record fizzes along with an urgent yet undeniably focused energy. Compared to the Mind Rays of two years ago, when the band released their chaotic PNKSLM debut, 2019 finds the quartet oozing confidence. Here, track after track is delivered with an almost psychotic level of polish.

It’s probably helped that Mind Rays made this record under the watchful eye of Raketkanon’s Pieter-Paul Devos. This is one of the more polished-sounding punk records I’ve come across recently. Don’t get me wrong, there’s a certain charm to those DIY records with every instrument smothered in tape hiss and compressed into a low-throbbing mush. But it’s also a refreshing change of pace to find an album where the guitars sound crisp yet still in your face, the vocals are pushed out to the front and you can hear what the drums are actually doing.

In fact, the only thing that lets this record down a little bit is the absence of one standout stone-cold banger. There are high-points here, to be sure – ‘Pristine Condition’’s jerky, nervous-sounding riffs recall classic pub rock, while ‘Dead Centre’ is a menacing garage punk number with an explosive chorus – still, there doesn’t seem to be one song that really captures the essence of the album.

And that turns out to be Course of Action‘s Achilles heel. Taken together, the album’s ten songs rattle by quite nicely, but at no point do Mind Rays manage to find a hook or breakdown to really fix your attention.