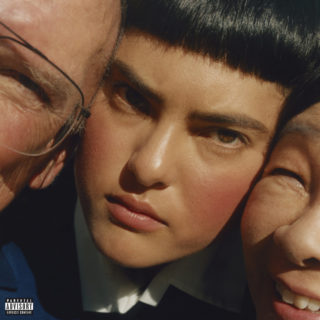 It’s hard to pin down an identity for Miya Folick. Born and raised a devout Buddhist in sunny California by her Russian and Japanese parents, not much restricts her to any ordinary cultural convention. After years spent trying to catch a break at crap acting auditions, Folick decided to throw in the towel and set up a Tinder profile titled “looking for a band”.

Almost four years and two EPs later, much like Folick herself, her music’s character is manifold. This, her first full-length album, is an impressive collection of quirky pop sensibilities that Folick employs through her own unique and charming vigour. Her beckoning vocal prowess on opening track ‘Thingamajig’ spells out the album’s bleary conceptual drive – something you can’t quite recall the name of but you know exactly what it means and feels like.

Folick’s lyrics are often deeply personal yet relatable. On lead single ‘Stop Talking’ she paints her own anxiety and insecurities with vibrant, dance-inducing pop. On ‘Leave The Party’ Folick’s classically trained background and vocal pyrotechnics allow for the illusion of an extra instrument. Her ability to accent each lyric with her own fluctuating pitch and bubble gum eccentricity is yet another tribute to her music’s character and is sure to be developed further in the future.