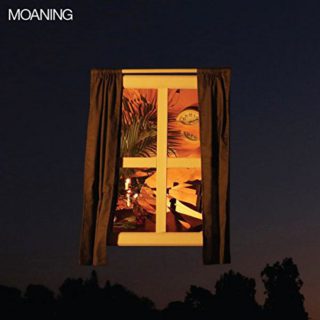 “We’re the same / Everything else has changed” moaned singer and guitarist Sean Solomon on early single ‘The Same’. It’s a neat line, succinctly expressing eternal desires and the frustration of a generation that feels cheated. That the accompanying homemade video showed the band playing on as friends set about demolishing the house around them with sledgehammers and pick-axes just extended the metaphor in a number of directions: you have to tear things down to build anew; smash the system; the circle of life.

Of course, such “rip it up and start again” tropes are nothing new, but Moaning’s most impressive achievement on their self-titled debut LP is stamping their own authority on abrasive post-punk and frantic anthems for a frazzled youth.

At times, they sound like the ultimate Sub Pop band; the skittering, anxious ‘Artificial’ and the driving groove of ‘Don’t Go’ could be long lost ’90s deep cuts rescued from the vault. But then they break out some celestial synths on ‘Close’ and you understand why they name check New Order. Personal heartbreak and angst fuel much of ‘Moaning’, but Solomon has a deft touch with such heavy subjects; he knows precisely when to up the reverb (‘Misheard’) and when to trade in the fuzz for something a little more precise and anthemic (‘For Now’). Do they pretend to have the answers? No, but that’s ok. Moaning are just three more twenty-somethings navigating choppy waters like everyone else, their sleek, impassioned music a lifeboat for us all.