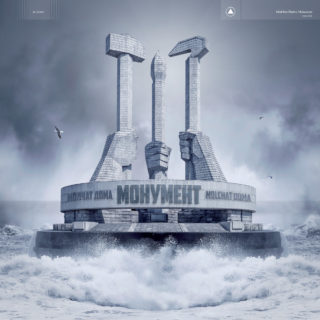 Belarusian trio Molchat Doma’s third album Monument is a refreshingly energetic take on the quarantine album. Written and recorded entirely during the pandemic, this album embraces its darkness, but doesn’t wallow in hopelessness. Instead, the music listens like an apocalyptic dance party, fusing post-punk, new wave and synth-pop to create a moody but compulsively listenable record.

The underground group gained popularity primarily through internet virality, their songs being featured in thousands of TikTok videos. Singer Egor Shkutko and multi-instrumentalists Roman Komogortsev and Pavel Kozlov came together in their hometown of Minsk to record this album in an effort to give fans a better understanding of who they are, outside of social media and the internet. Shkutko’s brooding voice, reminiscent of Morrissey, and the synth-heavy music further alludes to the 1980s. The band aren’t afraid of opening themselves up, and vulnerability takes the spotlight in each song. “I’m tired of loving and sacrificing myself / Forever doomed to heal sick wounds” reads the second track, ‘Doomed’. Molchat Doma’s songs might have made the round on Russian-language TikTok, but Monument is the band’s proof that their appeal transcends the minute-long video format.

The star song of the album is ‘Discoteque’, which pairs an energetic dance track with lyrics that accept coming fate, no matter the outcome. Shkutko doesn’t care if he dies, he asserts – he’ll keep dancing anyway, and he is a god on the dancefloor. Maybe that’s the lesson of the whole album, and what the band learned from writing a whole record during quarantine. Despite the darkness threatening to take over every aspect of life, these three musicians will keep living, marching towards the future with a small flicker of hope leading them through the murky present.