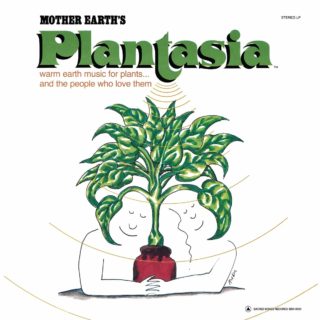 In Los Angeles in 1976, if you bought a houseplant from Mother Earth Plant Boutique on Melrose Ave, a heap of bumf came with it: a plantcare booklet, a “remedy chart” to diagnose disease, and, most curiously, an LP, specially commissioned by Mother Earth themselves and designed to be played in proximity to your new photosynthesising friend to encourage it to grow. That record, ‘Plantasia’, was only ever distributed in tiny quantities, and largely ignored by its greenfingered owners as a promotional gimmick. But when a rip of it appeared on YouTube earlier this decade, it drew a cult following as one of the earliest records to be performed entirely on a Moog synthesiser. Now, after 43 years, the record is getting a proper worldwide release.

But Plantasia is no cold exercise in electronic music boffinry, despite its pseudoscientific aims or synth roots. Indeed, its sleeve branding as “warm earth music for plants…and the people that love them” is about right: this is half an hour of inviting, soft-edged utopianism where tunes straight out of an easy-listening compilation are buffed to a sparkle by theremin-like sweeps and space-age twinkles, the Moog’s distinctive soundworld rendering everything dreamlike and quietly radical. And while this album holds appeal as a crate-digger curio on account of its provenance, it is also, more broadly, just a wonderful piece of pop composition, whose moreish Bacharachian melodies could just as easily be performed by a huge Hollywood pops orchestra, despite composer Garson’s clear love for the potential of his chosen futuristic instrument. Repotted into the pop landscape of 2019, Plantasia gleams and thrives, itself a flower revived.