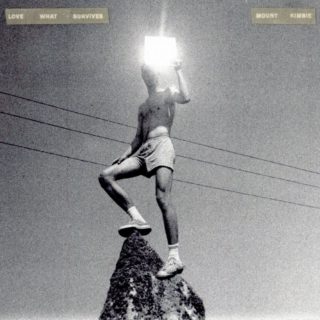 Few acts have a back catalogue as controlled, considered and consistent as Mount Kimbie, and it owes a lot to the fact that they’ve never been a band to rush a release. Back in 2010, Kai Campos and Dom Maker were gently shifting South London’s post-dubstep mood with the hazy alchemy of their brilliant debut ‘Crooks and Lovers’. In 2013, they followed that up with the glazed melodies and vocal forays of ‘Cold Spring, Fault Less Youth’. Now three albums in with ‘Love What Survives’, they’re moving forward once again with a floating mix of motorik beats, woozy pop and some solid vocal collaborations.

The steady, building insistence of opener ‘Four Years and One Day’, the drifting pan pipes of ‘SP12 Beat’ and the beat-driven, wonky synth of ‘Delta’ give the album a familiar instrumental spine but in between those rhythms, Archy Marshall (King Krule) makes a familiar raw return on the bug-eyed confessional of ‘Blue Train Lines’, Campos and Maker combine with Mica Levi (aka Micachu) on the soft lull of ‘Marilyn’, and then leave James Blake to add soulful theatrics to the organ-grind of ‘We Go Home Together’ and add a haunted presence to the stilted keys of album closer ‘How We Got By’.

It’s a dynamic that proves Mount Kimbie aren’t solely about creating soft-focus dance songs anymore, with both Maker and Campos stepping behind the mic at various points this time, after tentatively doing so on ‘Cold Spring, Fault Less Youth’. Even when they do, their unassuming vocals only serve to complement the blurry imperfections that have made Mount Kimbie so melodic, melancholic and cautiously soulful.

After playing these tracks out on the road for the last few months, it’s also interesting to hear how ‘Delta’ – the surging electronic anchor of the recent live shows – feels pointed and punchy on record, the way ‘Audition’ strikes a curious balance between New Order and Metronomy, and how the live version of ‘Marilyn’ goes from sounding a little clouded to playing out here as a lovely, lo-fi pop ditty alongside the equally endearing ‘You Look Certain (I’m Not So Sure)’.

The real appeal of ‘Love What Survives’, though, is the feeling that many of these tracks will still sound as fresh as ‘Carbonated’ (from that 2010 debut) does now, as painfully sentimental as ‘Before I Move Of’ (also 2010) and bang as hard as ‘Made to Stray’ (2013) by the time the next album comes around. Odds are, we’ll have to wait a little while for that one too but so far Mount Kimbie’s waiting game has proved to be pretty flawless.