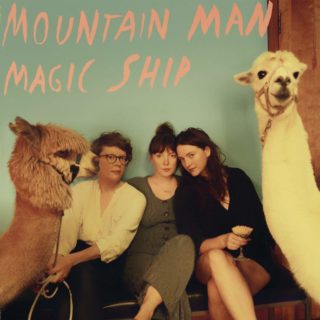 Sometimes less is more. The bareness of Mountain Man’s three voices – Molly Sarlé, Amelia Meath and Alexandra Sauser-Monnig – was precisely what made their debut record, 2010’s ‘Made The Harbor’, such a captivating, intimate listen. You could hear fingers scrape acoustic guitar strings, individual breaths, and their gorgeous harmonies reverberating around the walls of the abandoned ice cream parlour they recorded it in. More than anything, they captured a mood; a sparse, hymnal beauty that stood as a paean to nature, to Appalachian folk music and a long lost simplicity.

Life got in the way of a quick follow up – the trio have spent the last eight years pursuing various careers and projects – yet life is exactly what they’ve poured into ‘Magic Shape’, making it a richer, more textured listen. Conceived during a long road trip from California to North Carolina, when they camped under desert skies and marveled at the wilderness, the songs convey the tenderness of old friendships and time spent simply hanging out.

You can here such affection on ‘Rang Tang Ring Toon’, a rumination on the joys of eating beans underneath the stars and late-night skinny dipping, or ‘Boat’, where delightful harmonies recall gazing upon river traffic on a sun-dappled day; simple pleasures, and tales starkly narrated. At times the magic they conjure is electrifying, the songs soaked in a natural elegance that’s as rare as it is special. These three were born to make music together.