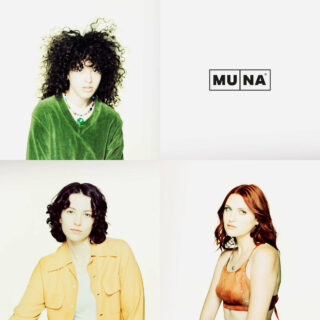 ‘Silk Chiffon’, the lead track from the third MUNA album, quite rightly made many ‘best of 2021’ lists. The kind of euphoric pop that Taylor Swift recorded around the time of Red, it became a queer anthem with Katie Gavin’s buoyant declaration that, “Life’s so fun.”

Its optimism marks the end of a difficult period for the L.A.-based trio. Dropped from RCA after the release of 2019’s Saves the World and stymied by the pandemic, they questioned the band’s continued existence. Salvation came in the form of Phoebe Bridgers, who signed MUNA to her label and who features on the aforementioned song.

Its musical brightness and self-acceptance are the album’s defining characteristics. On the Robyn-esque electro-pop of ‘What I Want’ Gavin signals her intention to grab life by both hands (“I’ve spent way too many years / Not knowing what I want”), while on the country influenced ‘Kind of Girl’ she embraces personal development and change (“I could get up tomorrow / Talk to myself real gentle”).

The longing slide guitar on ‘Shooting Star’, which is reminiscent of Bridgers herself, initially makes for a downbeat closing track. Yet when it blazes into life, its message of bittersweet empowerment couldn’t be more fitting.