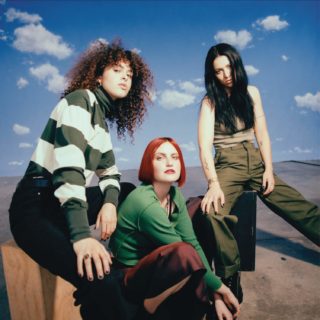 Often pigeon-holed as a “queer girl band” MUNA’s sophomore album Save The World demonstrates their artistic range: launching from the tender moments of opening track ‘Grow’ to self-love jam ‘Number One Fan’.

Whilst the crescendo-ing chorus of ‘Number One Fan’, which serves as the album’s lead single, is a closer approximation to the sound established on debut About U, songs like ‘Who’ offer a more stripped-back sound to match the vulnerability of the lyrics. The new emotional depth of the album is accompanied by a foray into fresh instrumentation, expanding the sonic palette from their mainstay of electro-infused guitar to integrate piano chords, thumping beats, vocal distortion and syncopated drums.

This new effort also feels more intimate than what’s come before — even the desolation of ‘Crying On The Bathroom Floor’ off About U pales in comparison — as the group delves into a more nuanced examination of feeling than we’ve previously seen from them. ‘Stayaway’, for example, pushes past the bravado of chart-topping break-up anthems — from Anne Marie’s ‘Ciao Adios’ to RAYE’s ‘Decline’ — to explore the troubled waters of new single-dom. As the song acknowledges, “leaving is the easy part” but the crashing post-love comedown, where friendship groups are divvied up between ex-partners and you’re forced to build a solo life for yourself, is significantly trickier.

Perhaps this is where the album’s depth and variety has sprung from, creating a significantly more robust body of work than the slightly single-note (but faultlessly catchy) music they had heretofore produced. Rather than reactively penning music in response to the losses and life events — leading with the emotion poured into their lyrics and letting the specifics of the sound follow — it seems like the group has turned inwards, reworking their musical DNA to facilitate a fuller form of expression.