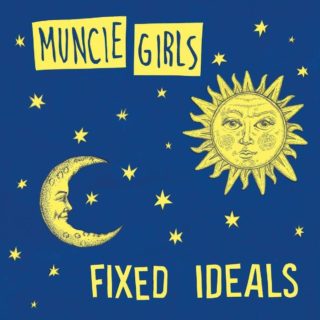 Muncie Girls are angry. Not in the loud, shouty way many of their contemporaries are, mind you, but there’s palpable frustration in their music. Across the band’s sophomore album ‘Fixed Ideals’, vocalist and guitarist Lande Hekt comments on the sad state of society, denouncing casual sexism and “TV adverts promoting war” with an irritated sigh.

Opener ‘Jeremy’ touches on the insidiousness of ultraconservatism, but only as a means for Hekt to tell her deadbeat right-wing dad to fuck off. It’s indicative of how the group brings politics into the following 12 tracks: as a springboard from which to explore much more personal, and interesting, subject matter.

Self-care is a major through-line. Hekt writes about alcoholism and her struggles with anxiety with refreshing candor on ‘Fixed Ideals’, whilst ‘Clinic’ recounts her eventual treatment for the latter. She sings about how important seeking help was for her mental health, though not before getting in a jab at the NHS for the “three week wait”.

Through the angst and frustration, though, there’s a pervasive optimism present on ‘Fixed Ideals’ that reveals itself when Hekt talks about the friendships in her life. “I was thinking that maybe you could look after me,” she stutters on rousing lead single ‘Picture of Health’, as Luke Ellis’ thick drumbeat rattles beneath her vocals like a jackhammer. There’s a lot to be angry about, but Muncie Girls would rather talk about the relationships that help us get through another day.