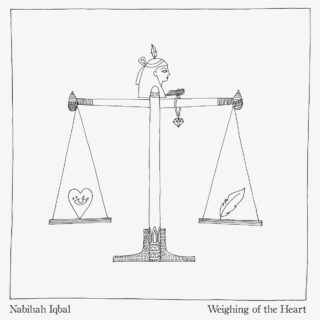 Ditching her former moniker of Throwing Shade, Nabihah Iqbal’s debut album doesn’t shy away from tackling some pretty huge themes. The title alludes to an ancient Egyptian ritual where one’s heart is weighed upon death against a feather to determine its right of passage to the afterlife.

Introductory track ‘Eden Piece’ and following instrumentals tease through Iqbal’s strengths in finding textures that would play as well against old school house, tropical and trance counterparts as they would find friends with electronica. ‘Slowly’ is then a particular standout with vocal meditations stretching across a transcendental soundscape, only to reel in its vacuities with a brilliant guitar line.

Spoken word and vocal elements sometimes trip the record up, however, out of place against the plush instrumentation. ‘Zone 1 to 6000’, about monotonous daily routines, relies on clunkily abstract lyrics about “thoughts and hopes” set against a motorik beat. Even the dreamy dirge of dissatisfaction in ‘Something More’ falls flat when you move past its rhythmic qualities with its overly self-indulgent rhymes: “You know it’s gone/ ‘Cos you can’t hold on.”

But for all its faults, Iqbal’s reclamation of her birth name, standing proudly as a female British Asian artist, assumes a pivotal place at the turn of her second musical life. If this is anything to go by, there’s a lot more to come.