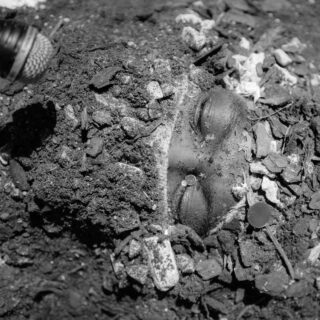 His style falling somewhere between spoken word and rap, NAPPYNAPPA exudes both the cool confidence of Kendrick Lamar and the lyrical playfulness of Brockhampton. However, that’s where the similarities end when comparing ONDAMICUNDERDACOZMICLYTZ (ODMUDCL) to most mainstream hip hop. On his new album, NAPPYNAPPA follows a more alternative hip hop path, allowing the abstract, existential reasoning to take the lead.

Echoing with laughter, repetitious piano lines and sampled words of wisdom, the production veers into slicker territory than NAPPYNAPPA’s previous LP, 2020’s IFEELJUSTLYKTHEIRART. The driving force behind these ten tracks is NAPPYNAPPA’s unique voice, tapping into his perspective on capitalism, corporations and violence. Twisting over and back, the Washington DC’s rapper’s rhymes follow unusual patterns and keep the listener focused on what he has to say next.

What is lacking here is a cohesive sound, as the record bounces back and forth between the conventional and the experimental. There are catchy, high-energy tracks that could fit right in with the contemporary trap scene, alongside which the more reflective moments struggle, as a melody repeats over and over in the background. Although NAPPYNAPPA’s choice to ponder the universe and existence carries on as a theme, these multiple, differing soundscapes don’t overlap with the thoughtful lyrics. It sometimes feels like an opportunity has been missed to embrace a more cosmic sonic experience, one that would enhance the lyrics; the wandering basslines and filtered vocals don’t carry enough magic for ODMUDCL to shine. Here, the experimental direction NAPPYNAPPA is following feels less like the work of a pioneer than an artist wrestling with fractured ideas.