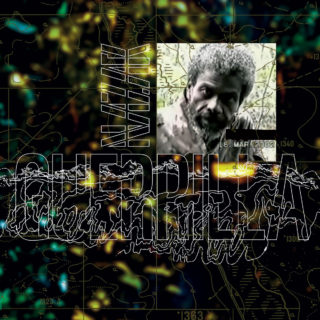 Inspired by his dad’s time as a Rebel General in Angola’s civil war, Nazar has made Guerrilla an exercise in perpetual motion. It’s a weaponised sound, utilising the trauma of lived-through conflict, politics and the ugly side of humanity into an album that’s sparse, wide-eyed and constantly on a swivel.

Developed over trips back and forth between Angola to his Manchester studio, and influenced by the stories and details within his dad’s wartime journal, Nazar isn’t just examining and exploring his family memories and his country’s bloodied past, he’s documenting his experience of it in its nuance and brutality.

‘Intercept’ is all broken beats and the bludgeoning drive of Death Grips — its voiceless intensity adding a deeper sense of menace absent any guttural howls. ‘Immortal’ snaps and cracks to the sound of gun chambers being loaded. ‘Retaliation’ is a distorted lullaby of twisted synth and dragging vocals. ‘Diverted’ feels like being chased into the darkness, the impending threat pounding closer with every beat.

It’s that feverish staccato tension gives the album its raw, rhythmic pulse as the “rough kuduro” – as Nazar has named it – comes to feverish life amongst a world of weapons, war machines and a visceral anxiety. The one outlier, ‘Mother’, serves as moment of exhalation: calming, not quite relaxed but still a distraction from the anxiety that wracks the rest of the album. Even as the brief oasis of relative peace, it has the opposite effect – a false sense of security buried within an album created to keep you on edge.

The glitchy, sample-heavy style is intentionally direct and unsettling, but it’s also compelling just how unpredictable Guerrilla really is. Throughout an album on which dread and confrontation are such powerful forces, Nazar’s intent here feels pretty clear: why just listen when you can live it, too?