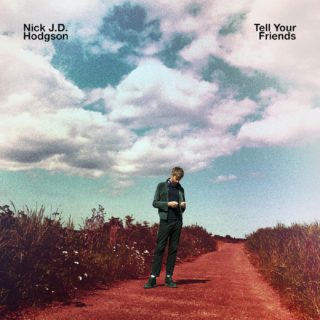 If the phrase “solo album from former Kaiser Chiefs drummer” lacks a certain level of pazzazz in 2018’s multicoloured pop landscape, it seems unfair to blame Nick Hodgson himself. For one, he had the sense to abandon the Kaiser Chiefs not long after the rest of the country did, leaving the band following their third album in 2012 to become a full-time songwriter for hire; for another, as the writer of most of his old band’s biggest hits, and then a fistful of successful tracks for the likes of Mark Ronson, Hurts and Shirley Bassey since leaving, Hodgson has a genuine pop pedigree not normally observed in drummers. Indeed, from that angle, if there’s one graduate of the class-of-2005 school of landfill indie who might still have something to offer, Hodgson could well be it.

All of which makes ‘Tell Your Friends’ an intriguing prospect: an unashamedly populist songwriter with nothing to prove has long been a formula for brilliance, from Paul McCartney’s first two solo records to Bowie’s late-70s peak and beyond. And in a lot of respects, ‘Tell Your Friends’ follows that lineage: it’s full of the sort of impressively classic melodicism that could end up as an earworm’s earworm, the playing is crisp and confident, and Hodgson’s production chops, here rendered in a sort of 70s sepia psychedelia, all reedy vocals, gauzy synths and glam guitars, are as self-assured as you’d expect from someone 15 years in the business.

Unfortunately absent here, though, is almost any degree of excitement or desire to communicate, leaving Hodgson’s precision-engineered pop nuggets feeling rather squandered in a charisma-free environment. From time to time, as on the elegantly swooping string ballad ‘Suitable’ or stomping grandeur of ‘RSVP’, the sheer quality of the writing is enough to mask the diffident delivery. More often than not, though, it’s difficult to escape the realisation that you’re listening to someone sing who has spent his entire career choosing to give that job to other people: ‘Honest Face’ is, structurally, a terrific piece of songwriting, but Hodgson mumbles it with all the passion of a chippie dictating back a takeaway order. Equally, the nagging swing of closing track ‘Don’t Forget to Go to Sleep’ complements its jaunty playground melody, but Hodgson isn’t the man for either its gently bolshy half-rapping or its silky falsetto.

Indeed, so unarresting are most of the vocal takes on ‘Tell Your Friends’ that the lack of top-line distraction allows Hodgson’s oddly rigid songwriting formula of hook and counterhook to start revealing itself, leaving the album feeling nourishing from song to song, but oddly mechanical as a whole, like a sitcom whose every episode is essentially the same.

That Hodgson decided to keep these beautifully constructed songs for himself suggests that ‘Tell Your Friends’ might be an attempt to prove that a pesky pop puppet is unnecessary to a crack songwriter if the material is good enough. Unfortunately, the result suggests the opposite: ‘Tell Your Friends’ feels more like a series of golden pop demos waiting to be brought to life.