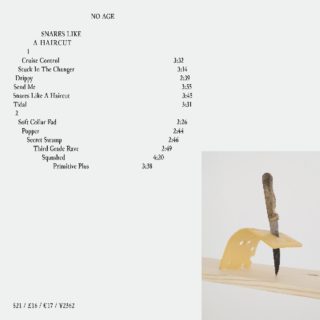 No Age’s fourth full-length release signals a retreat from the art-punk of 2013’s ‘An Object’, which saw them dabbling with sound collages and lean noise rock. Galvanised by recent world events, guitarist Randy Randall and singing drummer Dean Allen Spunt have made a back-to-basics album “for the disparate band of misfits who 2017 couldn’t kill.” It sounds urgent, righteously angry, and very much like it was recorded during the heyday of ’90s noise rock and grunge. Lead single ‘Soft Collar Fad’ is an early warning of this simmering rage, being a pithy blast of pop-punk that’s part Sonic Youth and part early Nirvana.

Both acts are touchstones throughout but there’s also the smack of The Vaccines covering The Wedding Present on ‘Stuck In The Changer’ and ‘Squashed’. There are occasional remnants of experimentation, namely in the ambient touches to the title track and ‘Third Grade Rave’, but the defining feature of ‘Snares Like A Haircut’ is its fuzzy chords and no-nonsense attitude, which isn’t so bad, but isn’t so strong.