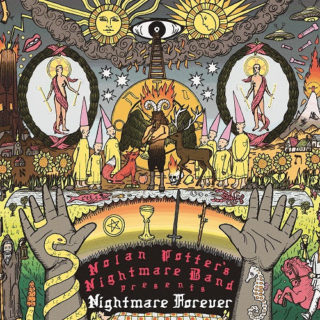 There comes a time in every music writer’s ‘professional’ life when they have to assume that someone, somewhere, is taking the piss out of them. Which is to say: are Nolan Potter’s Nightmare Band having a laugh? Answer: please God, yes. Surely we can’t be living in a world where Dungeons and Dragons flute-rock is totally unironic. Considering the album includes a track called ‘Dosing the President’, I’m going to assume there’s at least a bit of tongue in the proverbial cheek here. Possibly. Nightmare Forever is a confusing beast.

Let’s go straight to the aforementioned ‘Dosing the President’ – just under three minutes of blues-y psych-punk about slipping the “Commander-in-Creep” a hefty dose of LSD “at the ass-end of the idiot right.” This is where Nightmare Forever is at its strongest, with a stomping beat and Jack White-esque guitar trickery. That also comes into play on lead single ‘Elf Curse’, making it a writhing, serpentine creature and the best of the album’s instrumental tracks. ‘Elf Curse’ packs a lot into a short space of time, building an expansive world in a nod to the band’s fantastical inspirations.

But Nightmare Forever is hard to categorise. For all its intriguing moments, there are others that are off-putting. The album runs in one continuous thread, making the softer tracks (like ‘Pity in the City’) feel like transitional filler. Then there’s the overarching Dungeons and Dragons thing which, depending on how you feel about wizards and elves and their place in the musical canon, could go either way. Personally, I can’t say for sure but I think I’m starting to come around. It’s a weird new world out here.