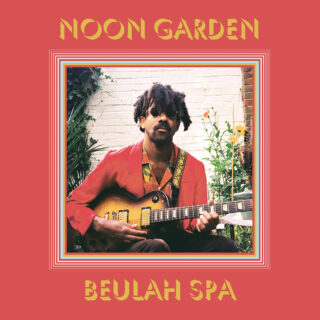 Beulah Spa’s opening moments are a lot like a delirious journey through an unfamiliar landscape: like a late-night train journey cutting through the country, or an empty, red-eyed flight over sun-bleached sands. It’s Charles Prest’s inaugural outing under his Noon Garden moniker, and its glimmering, synth-heavy title track transports us deftly to his genre-hopping, kaleidoscopic world.

And, touching down on this outlandish new turf, the record traverses a rugged terrain of sound and style. ‘Decca Divine’ touches on the heady side of things –  with grooving pop undertones and off-kilter synths that swirl against each other like a distant pull of coloured disco lights and hazy swells of dry ice – whereas the likes of ‘Desiree’ and ‘Dud Day’ opt for an edgier tack, with guttural guitars and a darker, deeper sense of multi-instrumentalism that feel a bit more like pages ripped from the straight-up psych-rock book.

‘Budaiya’ is similarly jagged, but with a craggy 1960s-esque undertone that sees Prest tick another genre off of Beulah Spa’s expansive bucket list before the nine-second-long ‘Annapurna Guest House’ splutters out a pithy soundbite of gentler, folk-flecked rhythms. ‘Eye Jewel,’ then, jolts in a different direction entirely with its meditative key taps and swirling artificial sounds dancing around one another like a drop of oil floating through water.

But, for all its multi-instrumental prowess and dexterous jaunts through genre, as the record draws to a close there’s an unshakable sense of something unfinished about the project as a whole. Maybe its sporadic track lengths mean some of its ideas come across as half-baked, or maybe its capers from dancey to docile and back again seem confused rather than cohesive. Prest has certainly carved out an enticing new landscape with Beulah Spa but, as is often the case with newfangled ventures, it seems the Noon Garden world remains under construction.