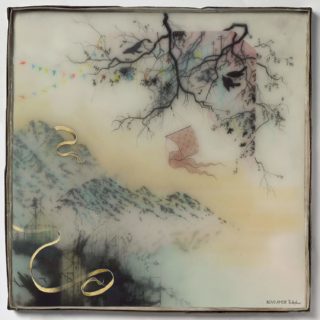 Inside the mysterious world of Novo Amor, only the immediate present remains intact. The concept of “emigrating” from oneself feels otherworldly and existential, but for Welsh folk singer Ali Lacy it’s just a natural evolutionary process.

His alias, Novo Amor, has been the product of a transition; a sudden point of change where all before him has been left and untraced. His long anticipated debut manifests this notion of change by looking deeply into his past and present. By using the ambience of night time sessions in his studio living space, the humbling, rustic grace of Bon Iver and Sufjan Stevens echo through stories of drug addiction (‘Repeat Until Death’) and even the implosion of a Nebraska town who couldn’t agree over some horses (‘Seneca’).

It doesn’t matter where Amor looks, change is what he finds. Most poignantly is ‘Birthplace’’s visually accompanied title track where Amor takes the opportunity to lay down the true visceral fear surrounding our plastic-infested oceans. Somehow radiating warmth but also relaying a sense of ice-cold reality, it’s a beautiful wake up call to an ugly and potentially cataclysmic truth. Perhaps that’s the idea in a nutshell, because ‘Birthplace’ excavates mystifying wonder from Amor’s own polluted depths.