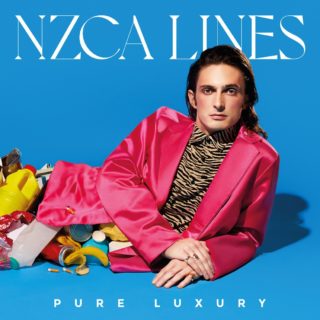 NZCA Lines’ third album, Pure Luxury, aims to convey one man’s processing of a fast-changing world. Lyrics covering everything from climate change to consumerism and beyond are backed by heavy basslines and disco influences. While the record wants to inspire physical reactions – bodies moving on the dancefloor and people changing lifestyles – the relationship between artist and listener isn’t quite there.

Though it’s a short album, too many of Pure Luxury’s nine tracks are indistinguishable from each other. Not until the fourth song, ‘For Your Love’ do we get a taste of something different. Another highlight and welcome change of pace is ‘Larsen’. This break-up track about the Larsen C ice shelf is poignant and unique, both sonically and lyrically. In this song, emotions are finally portrayed effectively, whereas before there is a disconnect leaving musician and listeners on opposite sides of a wide breach.

An example of the stiffness causing this wall is ‘Primp & Shine’, whose trite lyrics immediately take the listener out of the album. Any interaction between NZCA Lines (aka Michael Lovett) and his listeners is rendered flat by banal assertions like: “You want that dress well go treat yourself”. There’s no story here, despite some reliable beats and interesting basslines backing up the songs.

When NZCA Lines focuses on experimenting with sound, there’s much to enjoy on Pure Luxury. This album just misses the mark by expending too much energy on safe lyrics and the pursuit of cohesion. The result somewhat dulls the impact of his message – until those basslines re-enter, and all is forgiven.