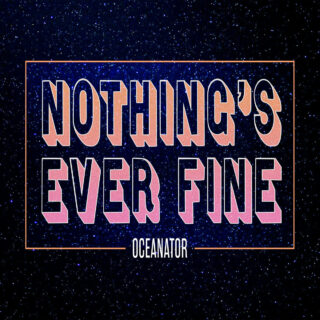 Nothing’s Ever Fine by Oceanator sounds like everything and nothing at the same time. All grunge-pop melodies, stirring indie and bombastic rock, singer-songwriter Elise Okusami hits all the right notes across the album’s 11 tracks, but it covers so much familiar ground that it never really takes grip.

That head-scratching proximity isn’t necessarily a bad thing, with ‘Morning’ hitting on strong ‘Black Hole Sun’ vibes, and there’s also lots to like about the perky energy of ‘The Last Summer’ as Okusami sings “Riding around with your best friends / Doing the same thing every weekend / So this is what it’s like to feel alive” in a happy ode to the carefree simplicity of teenage years.

The latter is a brighter step away from the apocalyptic filter she wrote 2020’s Things I Never Said through, but here Okusami’s ability to play in ambiguous extremes also manifests itself in some of her heaviest tracks. Sandwiched in the middle of the album, ‘Post Meridian’ leans into a thick, snaking bass line before stamping into crashing cymbal drama and crunching, overdriven guitar, ‘Stuck’ repeats the trick, switching it up a little with scuzzy bass, accelerated tempo changes and rolling jams, and ‘From the Van’ completes the trio with big, chunky chords that, just for a few seconds, sound like they’re about to burst into Rage Against the Machine’s ‘Killing in the Name’.

An album of lightness and dark, sludging half-tempos and clean, bright hooks, Nothing’s Ever Fine spends so much time in the contrasts, a little bit of focus would make all the difference.