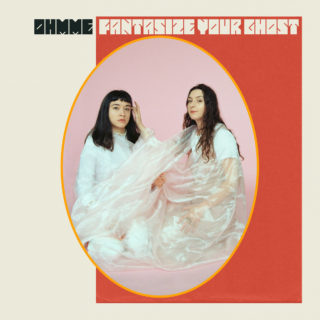 The direct result of Ohmme’s spending more time on the road than in their native Chicago, Fantasize Your Ghost is an exhilarating reshaping of their brand of guitar pop. Myriad influences are revealed here: from the gentle folk inflictions that linger in the distance on ‘Spell It Out’ to the instrumental no-wave of ‘Sturgeon Moon’ – eerie and perturbed – the album often takes unexpected turns, though all ten tracks do have one thing in common: a tendency not to get too complacent. Essentially, Ohmme’s second album has no consistency, but that’s why it works. Unlike so much of what we’re used to, this is not music fixed on one particular theme, place or time.

The juxtaposition between measured calmness and cluttered chaos resembles the ebb and flow of life as a touring band. Dramatic but hopeful, it’s deeply concerned with the self, the future, and what home means to someone whose time is occupied by travelling to city after city, weeks on end. The album is lyrically engaging, but never too oblique: the relatable banality of everyday occurrences is recounted seamlessly, thanks to the extraordinary vocal talents of Sima Cunningham and Macie Stewart.

The album concludes with ‘After all’, a track that echoes the best qualities of their contemporaries; the nuanced melancholy of Cate Le Bon’s earlier work comes to mind, for example. Indeed, the crooked guitar work that litters each song resembles the Welsh musician’s propensity for melding pop melodies with the experimental weirdness of no-wave and post-punk. Elsewhere, facets of garage rock shine through, in between the occasional moments that spiral out of control. Ohmme show us that pop music can be smart, and chaos doesn’t have to be shambolic, but both can sound beautiful, too.