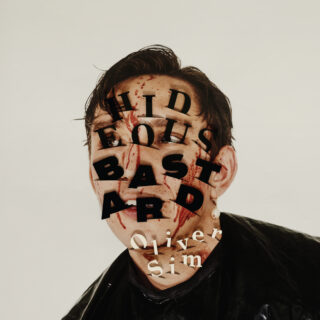 Given his legendary status, it’s surprising to learn that Jimmy Somerville was ashamed of his voice in his younger years. That piercing countertenor wasn’t heard as angelic, but unmasculine, a quality to be rejected. Now, he fully adopts that guardian angel role for Oliver Sim on ‘Hideous’. “Be brave, have trust / Just be willing to be loved,” the angel calls.

Sim’s vocal is in conversation with Somerville’s throughout Hideous Bastard, shrinking into a guttural, dissociated rumble. “Voice fell down a couple of octaves / so far down I thought I’d lost it,” he sings on ‘Unreliable Narrator’. Sim presents himself as full of that shame – shame in his sexuality, in his positive HIV status, in his body.

Like many queer artists before him, he finds a way out of this shame through self-deprecation and an unapologetic reclamation of what might make him sick and perverse in the eyes of homophobes. Take the music video for ‘Hideous’, where Sim literally monsters himself during a sad and funny trip through a sex club in the netherworld.

The resulting album is a heartfelt journey towards self-acceptance, told through raw, minimal inversions of the classic pop sounds Bronski Beat pioneered decades ago. The record’s success comes in that slow-burning move to honesty.

On ‘Romance With A Memory’, the inherent silliness in his rumbling vocal masks a vulnerable acknowledgement that he can’t open up to partners; but later on the record, when Sim’s voice is unaffected, we can feel how exposed he is. ‘Saccharine’ is an open, earnest ballad, with no barriers in between Sim and the truth: “The moment I got that taste I felt naked and afraid / I’m right back to sugar-free with my heart under lock and key”.

The record’s final trio of songs underline Sim’s self-acceptance with joyful melodies and peaceful repurposings of the signature club-influenced sound of his band, The xx. ‘GMT’ opts for comforting warmth and humble verses, in a snapshot of Sim’s life improving in the everyday. ‘Fruit’ follows with a dramatic call to “take a bite” of what he’s been missing out on, complete with Somerville on backup vocals. It’s camp, overreaching, and exactly what this story needs. Then, on ‘Roll the Credits’, he’s back to being a horror film villain, happy in the role he was born to play.