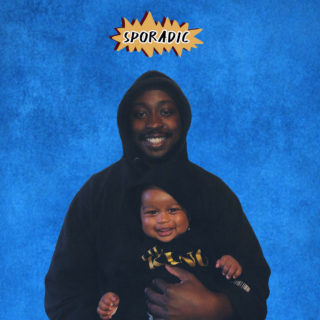 The full-length debut from Tottenham’s Oscar #Worldpeace is a strangely unfulfilling experience, an album infuriated by the relative absence of its creator’s known talents. As tracks from his previous project Recluse indicate, Oscar possesses the common touch to be able to articulate real world experiences with a concise elegance, but here, with only a couple of exceptions, he opts to let the mood do the talking.

Opener ‘Shine’ is one such outlier, a paean to his newborn son of the same name. “You and your mum saved my life / Suicide should have taken my life / But now I got yours and mine,” he says, suggesting a confessional intimacy that never fully materialises as the album plays out. Instead, tracks like ‘Ooo’ and ‘Touch’ revolve around single lines repeated almost to the point of parody until refrains become blunt, bludgeoning mantras.

The production, upon which the entire impetus of Sporadic relies, comes from long-time collaborator E-Whizz and is a cool, underplayed, low-end meld of grime, UK garage and R&B, keeping an even keel and lending a distinctive, cohesive vibe to the album’ brief runtime. Had Oscar been willing to offer more by way of thoughtful lyrical content, of which he is capable, then these 22 minutes might not have felt the stretch that somehow they do.

The one moment in which Sporadic truly comes to life is during the Mike Skinner-featuring ‘Leave the Devil Outside’. Skinner raises the bar with his signature everyday-universal observations and Oscar rises to the bait, allowing thoughts to flow freely from his mind. So many ideas are compressed into these two minutes, so why confine them elsewhere?