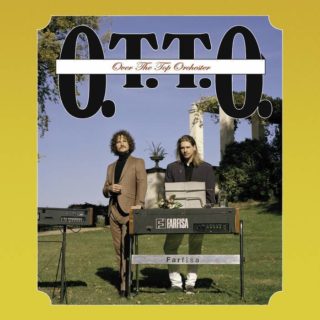 Looking at the artwork for this release you could understandably be mistaken when forming a first impression, visually appearing as a long forgotten, artistically misinformed release of a substandard ’80s indie synth-band that didn’t quite hit the mark, eventually finding its way out of an optimistic fan’s record collection and into the charity shop reduced to clearance section. But just as perseverance is required to flick through the endless stacks of frayed and yellowing sleeves to unearth an ultra-rare disc of wax, OTTO’s Over The Top Orchestra obliges a similar approach.

The pair appearing on the artwork are Alexander Arpeggio (not since Donald Trump has a last name been so apt) and Cid Hohner. Together, from their base in Germany, in recent years they have been specialising in releasing small-scale 12-inch singles of electronic compositions. These works are heavily informed by synthetic organ and rhythmically complex drum arrangements, which amalgamate to form what can only be described as Electro-Kraut.

Now, looking ahead to a full-length debut, tracks like ‘Auto-Disco’ continue to craft an imposingly intriguing electronic soundscape of intertwining synthesised strings, organs and drumbeats, which manage to sound both vintage and new at the same time. On ‘Schuss im Schampus’ they work toward purveying a propulsive rhythm, punctuated with exacting trills of electronic oddity. Overall on this impressive debut, OTTO add to a string of absorbing singles and efficiently present more organ than a butcher shop floor, more groove than a furniture workshop and more electronic eccentricity than Michael Faraday. Overlook the artwork and you’ll find a prize that demands repeat listens.