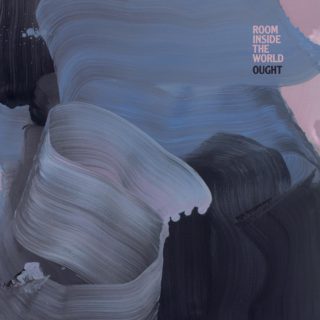 Almost exactly halfway through Ought’s third album – four and a half songs into the nine-track running order – a 70-piece choir rises imperceptibly from the depths of a song that’s propulsive and appealing but nonetheless earthbound, and begins a yearning back and forth with Tim Darcy’s own brooding baritone that takes it into the stratosphere.

On the one hand, it’s a marvellous surprise: despite the broadened sonic appetite already on show up to this point, not to mention Ought’s established affinity with a certain doomy grandeur, something as lofty as a choir seems out of kilter with the band’s tight-coiled minimalism. On the other, though, the most ambitious moment of their recorded career to date arrives here as part of a perfectly natural progression: so confident is the preceding twenty minutes of ‘Room Inside The World’ in terms of writing, arrangement, delivery and atmosphere that, by the time the choir enters, it feels like an inevitable triumph. Before that, there have been knotty choruses, throbbing vibraphones and lyrical acrobatics all integrated seamlessly. As they complete their first-half victory lap with ‘Desire’ dissolving into sax blasts and guitar splangs, nothing seems beyond them.

All of which makes the album’s second half a tough act to follow and, perhaps aware of this, Ought change tack, presenting a suite of songs that trade the previous energy for languor, decisiveness for investigation and, crucially, focus for sprawl. That’s not to say there’s anything bad here – indeed, ‘Pieces Wasted’ has a terrifically libidinous swagger, and ‘Take Everything’’s sudden switch into choppy guitars is pleasingly fierce – but after such a breathtaking start it’s also hard to ignore the dip.

If ‘Room Inside The World’’s second half maintained the dizzying standards set by its first, the album would be a masterpiece. Instead, Ought have made something tantalisingly imperfect – not that that matters too much: the nagging strings in ‘Disgraced In America’, the motorik edginess of ‘These Three Things’ and, yes, the sheer majesty of ‘Desire’ are what lingers most once the album ends. What’s more, the greatness here is the sort that you sense Ought might build on rather than fall from; this is the sound of a band who now really know one another, a well-oiled machine just warming up. It leaves quite the promise for album four.