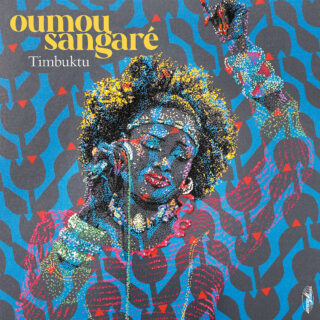 Timbuktu is Oumou Sangaré’s ninth album in a 30-year career which has seen the Malian singer become not only musical royalty at home and in Western “world music” (not our term) circles, but also a UN goodwill ambassador, a charity head, a hotelier in her native Bamako, and even a car developer. When the pandemic stranded her in Baltimore in mid-2020, however, the 54-year-old was able to shut out her extra-curricular duties and concentrate purely on music-making for the first time since she was a teenager, and the 11 songs here are the fruits of that focus.

Those hoping these conditions might produce a masterpiece, however, may be disappointed with Timbuktu – instead, they’ve fostered a record that’s undeniably well written, played and produced, but also frustratingly inward-looking and samey, in terms of both themes and presentation. No album, for example, needs two separate songs in which the singer implores herself, in the third person, to ignore the haters (‘Sarama’’s lyric, that translates as “Instead of being jealous of someone who is predestined, blessed and lucky, you should make friends with them / Don’t be jealous of Oumou Sangaré, she hasn’t done anything wrong to you” the most egregious example), and while there’s a degree of stylistic variety across the record’s 42 minutes, the vast majority adopts a mid-pace melancholia that is certainly heartfelt, and at times quite affecting, but also, at length, rather deflating.

When Sangaré offers respite from the formula, though, things look up: opener ‘Wassulu Don’ has oodles of kosmische groove and loosely undulating pulse, and highlight ‘Kêlê Magni’, all thumping techno texture below a terrific buzzsawing lead line, is Sangaré’s defiant response to the awful civil war in Mali’s north, a genuinely forward-looking piece of music that could easily double in length. An entire album that leant into that side of Sangaré’s personality, full of defiance and musical cross-pollination, would have been challenging, urgent and exciting. Instead, Timbuktu ends up, like so much of the West African music that manages to penetrate the Western mainstream, resembling tasteful, non-threatening coffee table exotica. For someone with as much to say as Sangaré, that represents an opportunity missed.