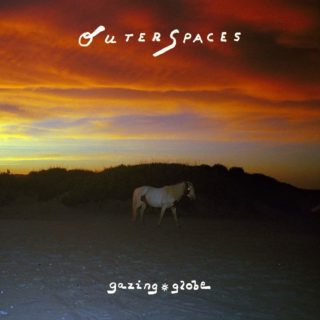 Cara Beth Satalino is an artist used to isolation. Raised in a rural New York town with a population of less than five hundred, she taught herself to play guitar by ear; a self-described “poor collaborator”, she formed Outer Spaces as a vehicle for solo expression. Finding herself alone again during a break from a long-term relationship, Satalino’s sophomore record, Gazing Globe, sits in this solitude, serving as a journey of self-reflection and self-discovery.

Despite the turmoil that inspired its conception the record is upbeat and assured, and jam-packed with glistening guitar riffs and snug drum beats. These are delicate, lovely indie-pop songs imbued with an inexplicable fortitude. Satalino’s voice is controlled yet sensitive; her lyrics dance between confessional and deeply figurative. The charming ‘Truck Song’ is a love letter to the tour vehicles that have carried her, finding wisdom and instruction in their breaking down: “Get on your feet/ You’re on your own”.

Looking at the world in a gazing globe, what you see is reality, but distorted, augmented; and the record is as iridescent as images conjured by its namesake. “I saw your reflection in the gazing globe,” asserts Satalino on the title track, perhaps addressing herself.