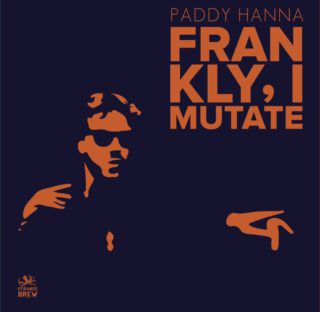 A trumpet line written in 10 minutes. A studio knocked down a month after the record’s completion. An ode to a 19th century French painter. Time flows erratically through ‘Frankly I mutate’ – the second album from Paddy Hanna – but it’s also a testament to his often timeless approach to songwriting. ‘All I Can Say Is I Love You’, for example, is a swaggering, bombastic ballad that would come off as overly earnest if it wasn’t for Hanna’s charming cynicism and wit. Hanna’s USB appears to be capturing snapshots of time, and turning them into dizzying showtunes.

Hanna and producer Daniel Fox (of Girl Band fame) have done a fine job of crafting a lavish, classy, breezy and fun record – but also one that can be undeniably overbearing at times. ‘Mario Lanza’, a culprit of that, is a frantic, ramshackle tune that wouldn’t be out of place at an Irish bar at 3am. Meanwhile, ‘Ida’ is a genuinely odd mutation of drunk Americana and ‘Bad Boys’, the record’s infectious standout single, is the sound of a local cult lo-fi hero stepping into the spotlight.

That said, ‘Frankly I mutate’ is occasionally awkward and unavoidably jarring. Hanna has a habit of overdoing his vocals: for every flash-in-the-pan moment of candour and charm, there’s another that’s grating and abrasive (see the unhinged freak-pop of ‘Toulose The Kisser’). Yet, that’s the fun for Hanna and he appears to revels in it.

The title ‘Frankly I mutate’ is an understatement; a hit ‘n’ miss collection that’s irrefutably characterful, even if sometimes that’s a bit much.