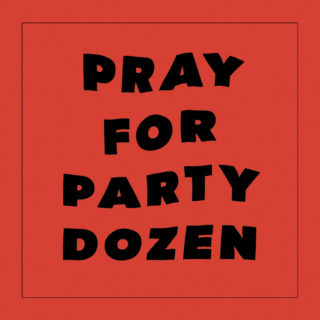 The cover art of Party Dozen’s second album has a faint resemblance to Black Sabbath’s Master of Reality album. It’s a rare comparison for the Australian noise-rock duo whose sound is most unlike any other band’s – including their own.

Built on a pillar of unrelenting improvisation, the album’s 36 minutes shape-shifts through a dizzying array of rock subgenres that it’s pointless keeping track of, with so many tempo changes that it’s impossible to know when a song has been swallowed by another or is just temporarily immobilised.

Despite this, there is a semblance of structure to be heard with Kirsty Tickle’s soaring and cosmic saxophone typically leading and weaving itself through the transient fields of Jonathan Boulet’s multi-instrumental noise like a sonic serpent.

At times of accidental alchemy, they almost sound like a forgotten Shabaka Hutchings side project – but for the majority of the time don’t. Just like they occasionally build to moments of gentle transcendence worthy of Australian forebears, Dirty Three, but again most of the time, don’t. They instead appear content to put on and dump aural disguises like a fleeing hitman.

They infuse Krautrock with a surfer cool pumping out along whatever coastline Germany has on ‘Auto Loser’ before seemingly auditioning for an Electric Wizard support slot with the stoner-swagger of ‘The Great Ape’. ‘Play the Truth’ vibes like a soundtrack submission for a Nick Cave-written Australian western whereas ‘Scheiße Kunst’, one of the only tracks with any vocals, broods with a psychotic stillness that’s obliterated by the balls-to-the-wall rock of ‘The PDD’.  Closer ‘Shit Faced’ dons a faux-dreamlike finality that tries to stitch the album’s disparity together into a bulging misshaped sack and just about succeeds.

It’s hard to love an album that never materialises into anything coherent. However, in its oddity, aggression and occasional flashes of brilliance, there’s a thrilling and fleeting romance to be had here.