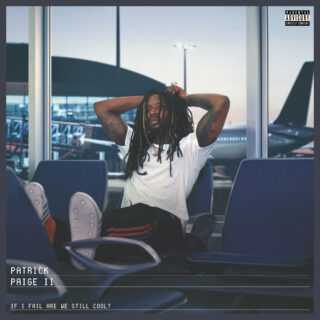 Patrick Paige II had sturdy foundations before embarking on a solo career. As the bassist for The Internet, he was the sturdy foundation – a dependable backbone for the flashier members of the group like Syd and Steve Lacy to rely on. But playing a supporting character filled him with self-doubt about going solo. This uncertainty coloured his 2018 debut Letters of Irrelevance with a heavy pensive quality, his understated rapping submerged in gauzy bass notes. As it turns out, he more than had the skill to play the lead, and his follow-up record giddily takes the reins.

If I Fail Are We Still Cool? still explores Paige’s emotional state, but the songs are wide-open and inviting. These are hookier, punchier songs that combine melody and penmanship with skill. There are even convincing flex tracks like ‘Big Plays’ and ‘Westside Player Shit’ that are concerned with nothing but revelling in Paige’s success, and he’s got the charisma to own it.

‘So They Say’ and ‘Who Am I’ bring a level-headed dose of reality, but Paige’s front-and-centre approach to singing and production gives these tracks a welcome agility. Speaking of agile, on ‘Freestyle’, Paige goes toe-to-toe with Saba’s speedy and quietly confrontational verses. It sounds like he could do just about anything.

If I Fail… is a long record, at 17 tracks. You get the feeling that Paige was having too much of a good time to stop recording. That energy makes it a breezy, engaging listen, even if some moments go by without popping out memorably. At its best, it sees him fully transformed into a bandleader.