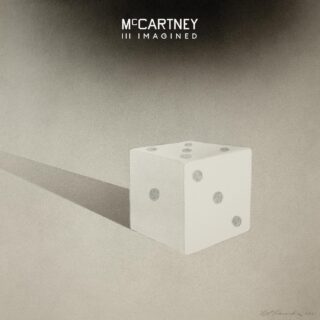 Paul McCartney recorded all three volumes of McCartney during lockdown circumstances, whether self-imposed or otherwise. Written, played and produced by himself they’re marked by a looser, more unorthodox quality than his more commercial releases.

Imagined picks up the baton of this experimentation with an invitation to a number of famous friends to reinterpret tracks from last December’s III. They bring their signature styles to the project, largely updating them with a light ’70s soul feel that respects the strong melodies of the originals while making them sound remarkably contemporary.

Dominic Fike’s version of ‘The Kiss Of Venus’ is the prime example of this transformation, his lead vocals turning a largely acoustic track into slinky R&B. Phoebe Bridgers – the only other person to re-record vocals and one of just two women on the album – likewise turns ‘Seize The Day’ into dreamy folk-pop.

The remixes vary widely in their impact. St Vincent brings a loping Portishead-style bass to ‘Women And Wives’ while Damon Albarn chops up ‘Long Tailed Winter Bird’ so that the original’s finger-picked guitar line isn’t introduced until halfway through.

Other artists are more faithful to the studio versions. Ed O’Brien turns up the hard blues-rock dial on ‘Slidin’’, which would feel at home in a Royal Blood set, while Josh Homme drew the short straw in getting ‘Lavatory Lil’. Widely recognised as the weakest track on III, he runs with its playful edge and adds his signature Queens Of The Stone Age sound.

These re-interpretations, which also come from the likes of Beck and Blood Orange, hang together stylistically but it’s hard to know who’s the intended target audience. A curio rather than a necessity for McCartney fans, it nonetheless celebrates his continued influence and willingness to remain open to fresh sounds.