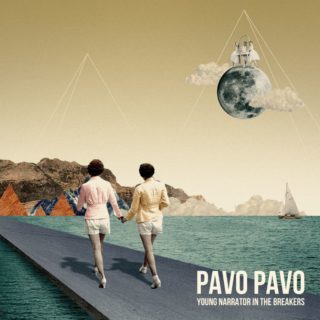 When a wave breaks, it transforms potential energy into more turbulent, kinetic energy. It’s almost the perfect metaphor for the often tempestuous transition from childhood to adulthood, a force that Brooklyn’s Pavo Pavo aim to capture on their debut album.

‘Young Narrator In The Breakers,’ though, sounds more like the quiet blossoming of a recluse than an explosive rite of passage. Despite being bookended by the fast-paced ‘Ran Ran Run’ and propulsive ‘2020, We’ll Have Nothing To Go On,’ it’s an album that meanders along with its sepia-toned version of psych-pop.

The instrumental ‘A Quiet Time With Spaceman Sputz’ creates a soundtrack to a lost ’60s sci-fi with its haunted whistling and languid, retro synths, while the slightly atonal electronic melody of ‘Annie Hall’ is about as neurotic as Woody Allen himself. The pounding percussion of ‘No Mind,’ which is reminiscent of early Tame Impala, injects some much-needed energy into the album, but doesn’t offset the fact that this isn’t quite the stormy portrayal of youth you might be hoping for.