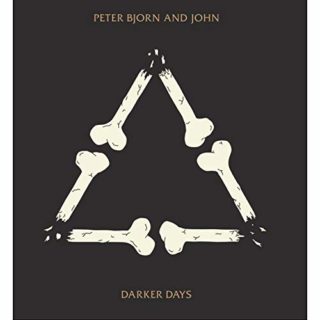 Survivors of a period when a plethora of Swedish indie bands achieved at least a small measure of commercial success, it comes as something of a surprise that this is Peter, Bjorn And John’s eighth studio album; there’s a lot more to the trio’s back catalogue than the decade-old, formerly ubiquitous whistling hit ‘Young Folks’.

So what happens when indie-pop ages? When the carefree enthusiasm embodied in that twee melody is tempered and diminished? When that youthful brightness starts to accumulate flecks of world-weary rust? In this case – very little, apparently. Their innate ability to assemble a catchy indie-pop chorus hasn’t deserted them, it seems – ‘Darker Days’, in contrast to its title, is fresh, bright and shiny, and pretty much instantly accessible. The record has an almost entirely upbeat (if sometimes wistful) feel, awash with hugely infectious riffs, falsetto vocals, and – in some cases – choruses you just can’t wait for, like that in the harmonic majesty of ‘One For The Team’.

It’s not all smiles though. They strike a more downbeat note on ‘Living A Dream’, with lines like “mirror in the morning is a weary old sight”. Elsewhere there are just enough minor chords to dodge any overarching sickly-sweetness, and ‘Sick And Tired’ has a more minimal feel – a kind of LCD Soundsystem-lite.

They recently released three singles at once from the album. They could’ve chosen any of the tracks on ‘Darker Days’, they continue to make themselves spoilt for choice.