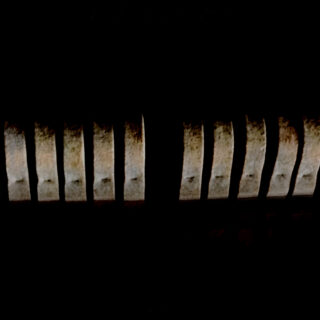 Peter Gregson has become one of the most celebrated names in contemporary British classical composition through a series of five acclaimed solo albums, augmented by his work on the soundtracks to titles such as Bridgerton and The New Pope. On his newest project, Piano Book, he turns introspective, casting his creativity inwards to re-evaluate compositions from his own back catalogue.

A cellist by trade, here Gregson funnels pieces that were written for and originally performed by string sections through the piano, on an expedition into the songs’ internal structures. Where his most recent record, 2021’s Patina, was all about melody, this time the focus shifts to chord arrangements; playing chords on a cello requires a measure of physical assertion, or as Gregson puts it, “gymnastics”, but the piano is made for the job, allowing the interplay between chordal phrases to explore corners of these compositions’ inner workings that had so far been unreachable.

The 2014 original version of ‘Lights in the Sky’ consisted of a tower of muti-tracked cellos, but here, all of those are replaced simultaneously by one pianist. Fred Kindt of Manchester art-poppers The Slow Show is Gregson’s choice to fill the piano stool, and it is his splayed fingers that replicate the work that previously required multiple musicians. The listening experience is unalterably different in this context: where there is restraint from Kindt, we hear it; where there are moments of release, we feel it.

‘3.2 Allemande’, originally released on 2018’s Bach Recomposed, focuses this concept the most acutely. What we are hearing is a piece once created by one compositional voice, which was later refracted through the prism of multiple performing musicians, only now to be focused back into the mind and hands of one musician again, clarifying the message back to its core principles, albeit from a new perspective. It is a contemplative listen, personal, with each decision made in the moment. The pregnancy of each micro-pause and weight of each note signifies some cognitive process occurring in real time; it is a reminder of the delicate fragility of human performance.

‘Adam Leaves’ was written for a string ensemble and a violin lead, but in this bare version, what we miss from the sheer, swelling volume of the group, we gain from the singular surge of emotion near the track’s finish. In much the same way as James Joyce observed that the universal is contained in the specific, we more intimately relate to the sentiment of one musician’s uniquely personal expression than we do when the same idea is communicated in concert. Piano Book reminds us of the lessons of folk history: great works persevere through time, but only when kept alive by new forms of expression.