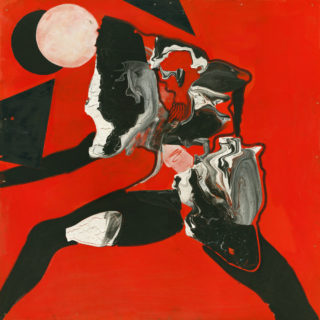 Philipp Gorbachev may be renowned for his solo electronic material or his party-throwing antics in Moscow (that usually end in the police shutting them down) but for this latest venture he has assembled a band in the form of the Naked Man for a spontaneous, scrappy and seductive debut offering.

The album is a peculiar mix of strutting grooves and discordant eruptions, with funk-tinged bass lines rolling smoothly throughout as echo-laden vocals howl atop of manic drums and wildly whirring synthesisers, creating a sort of spasmodic disco, like ESG being given electrocutions. Whilst it’s undeniably chaotic, occasionally messy and constantly unpredictable, it makes for persistently curious listen, as chasing its tale becomes a wild and spiralling pursuit.

The chaos of the whole thing has a loose root in the Butthole Surfers, at least in tone, which makes even more sense once you learn that Paul Leary of the group has produced it. Despite all the album’s turbulence from beginning to end, there’s a prevailing sense of fun to it all, too; whilst it’s structurally interesting, texturally vast and stylistically twisted, it still feels like a bit of a lark. The clear camaraderie of a group of new people getting together for the first time and just seeing what happens shines through brightly, consistently and successfully.