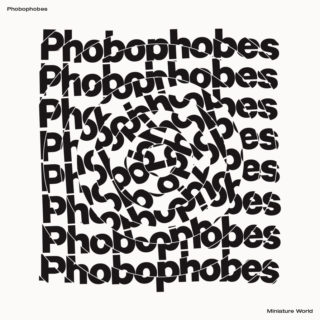 Londoners Phobophobes are a band that have endeavoured to stay true to their DIY roots. Frontman Jamie Taylor has roamed the world and built his own studio spaces wherever he’s been, while their artwork is home-grown – quite literally – depicting bacteria that was nurtured in petri dishes from the bacteria found on some of Abbey Road’s oldest microphones.

Even though they were invited to work with engineer Ken Scott (who’s worked alongside The Beatles and Pink Floyd among others), their do-it-yourself attitude runs throughout their debut album ‘Miniature World’. That’s evident straight from the off with the pounding basslines and gothic undertones of ‘Where Is My Owner?’

That sets the scene for an album that feels like a post-apocalyptic, eerie wonderland packed with post-punk guitars, clamorous organs and driving drum beats, which all swirl around the magnetic anchor of Taylor’s doom-laden yet charismatic vocals. While their songs are often replete with lo-fi, scuzzy guitar riffs and clattering, explosive percussive elements, the likes of stomping cut ‘The Fun’ prove they’re also adept at crafting a fine hook.

Some of the record’s most arresting moments come from hearing Taylor’s lyrics, from sparkling puns such as “Get an illegal hello and a legal high” on ‘Free The Naked Rambler’ to the extended critique of excessive consumerism on ‘The Never Never’, where treading financial water and ultimately spiralling into debt is fittingly accompanied by cascading synths.

Although it’s pretty much impossible to imagine Phobophobes ever giving their music a sleek, squeaky-clean polish, some of ‘Miniature World”s rougher edges can occasionally obscure exactly what Taylor is saying. Considering some of the sharpness and wit on display, this becomes a minor frustration on what is otherwise a supremely confident first step.