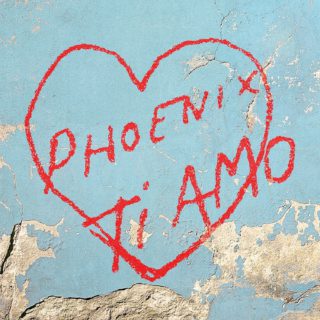 One could forgive Phoenix for playing it safe on their first album since major festival headline slots and top-ten chart placings became more expectation than surprise. After all, this is a band who toiled for ten years before being noticed anywhere beyond the Périphérique, so a desire to prolong the hot streak that they ignited with 2009’s ‘Wolfgang Amadeus Phoenix’ and then consolidated with 2013’s ‘Bankrupt’ is understandable.

That tactic, however, doesn’t always make for the most gripping home listening: sticking to formula often raises the suspicion that it all sounded better a few summers ago, on a sun-kissed southern European beachfront with 10,000 others, and songs end up acting more as aide-memoires than anything more intrinsically fulfilling, almost regardless of the attendant quality. And there are several moments on ‘Ti Amo’ that fit exactly that bill: ‘Tuttifrutti’’s melancholic synth stabs and rubbery discofied rhythm section make for perfectly serviceable, elegantly constructed pop music, yet its instant and almost cannibalistic familiarity robs it of much of its own personality. The same applies to ‘Fleur De Lys’, a peppy collection of keyboard hooks jostling one another for supremacy: for all its musical proficiency, it feels more like a thrown-together advert for Brand Phoenix than a new song in its own right.

All that said, though, it’s a testament to the bulletproof configuration of Phoenix’s template that ‘Ti Amo’ is still a rather infectious, enjoyable album, especially in its second half when things get a little darker: the relative sparsity of ‘Role Model’ mines the kind of depthless 80s pop-rock that hides a desolate, 3am introspection just beneath its sheen, and ‘Via Veneto’, an ode to one of Rome’s most glamorous streets, is laced with an arm’s-length detachment and loneliness that leaves its assessment of decadent high-living pleasingly ambiguous. Elsewhere, too, when the band lower the tempo somewhat (‘Goodbye Soleil’, ‘Fior Di Latte’), a sense of more three-dimensional yearning is allowed to peal through the stucco euphoria.

Thomas Mars has admitted that with songs about Rome, mozzarella and the fashion world, ‘Ti Amo’ was written as something of a love-letter to Italy. And just like all love-letters, its persuasiveness hinges on its originality: when Mars et al become self-parodic, their ardency is dull, albeit harmlessly so, but when they examine their feelings a little more closely, a far more appealing language emerges. On the evidence of ‘Ti Amo’, however, allowing that language to blossom fully is a risk that Phoenix appear unwilling to take.