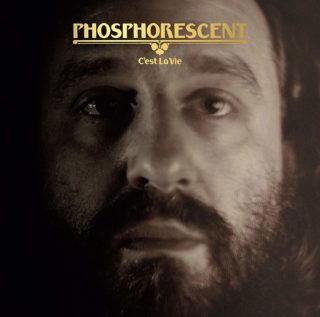 Phosphorescent is very much of a type. Previously described as things like ‘haunting’ and ‘frayed’, Matthew Houck’s project has been somewhat on hold since his acclaimed sixth album ‘Muchacho’ in 2013. In the five years since, Houck has been in love, built a studio by hand from the ground up and become a father (twice). Unsurprisingly then, this seventh outing deals with love, life, death and new beginnings. He’s called it ‘C’est La Vie’ – that grand beatific shrug.

The album certainly feels untroubled. Houck’s vocals are tender as ever, and the writing honest, but many of the tracks appear to hinge on a repeated few of lines that never quite dig down to the next level. ‘These Rocks’ for instance, reaches for an honest, vulnerable admission of alcoholism – or at the very least a troubled relationship with drink – but the recurring lines “these rocks, they’re heavy” weigh the track down and turn the sentiment into something more clunky. Similarly ‘My Beautiful Boy’ is intended to be a sweet tribute from a father to his son, and even manages it in places, but is again foiled by awkward phrasing.

While ‘Muchacho’ was considered a career-defining moment, bringing Phosphorescent’s country and indie-rock influences together into a statement of identity, ‘C’est La Vie’ isn’t quite so full of life. The sunny, almost tropical pop of ‘New Birth in New England’ is the record’s clear dynamic point, with a danceable groove. In the most part though the album is strangely flat. True to its name, ‘C’est La Vie’ hints at a carefree atmosphere, or an acceptance of the world as it is. Unfortunately, this also means that the album feels like it isn’t quite moving anywhere at all.