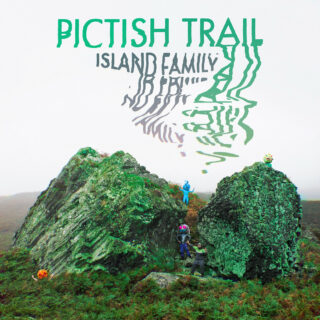 For over a decade, Johnny Lynch, aka Pictish Trail, has resided on a remote Hebridean island, the population of which, if you include himself, just about creeps into three figures. Whilst global pandemics and national lockdowns may have had even the most hardcore devotee to a metropolitan milieu yearning for a bit of fresh air and greenery, it might surprise you to learn that before an enforced lifestyle shift Lynch was “not that much of an outdoors person.” His fifth expedition, Island Family, was borne from the progression of a communicable disease forcing a professional musician and self-proclaimed nature naysayer further into a remote lifestyle, unable to access the usual urban reprieve of music venues and recording studios.

The record parades a magpie-like collection of genre and influence, largely made up of digital textures – at least on the surface. Opener ‘Island Family’ straggles headlong with electronic drum machine beats that wrap around psychedelic-adjacent melodies, sounding not unlike Halcyon Digest-era Deerhunter. Elsewhere, the analogue synthesiser propulsion and distorted guitar grit of ‘Natural Successor’ produce a garage rock groove that would slide comfortably onto Beck’s Odelay.

Upon closer inspection, Lynch’s enforced acclimatisation to his environmental circumstance can be detected among the automated trickery. The elemental guitar phrases of ‘Melody Something’ trickle alongside tender vocal refrains and birdsong, while the gentle unfurling of ‘Thistle’ creates a compassionate, understated and empathetic impression. Taken as a whole, Island Family sounds like an expression of acceptance, of both personal circumstance and musical curiosity. There’s a symbiosis between the natural and the electronic, formulating a multi-hyphenate, genreless record. It may sometimes struggle to establish a concrete through-line because of this approach, but will nevertheless reward repeat listens.