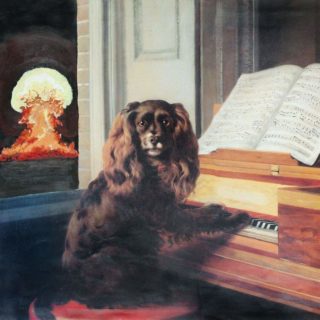 Nothing is more tedious than the conversation about where all the political music disappeared to. There has never been a year with more American artists addressing the big picture, but even so, few embody the fury better than Pill.

On their second album, the New York quartet compress their brittle punk into even tighter nuclear boxes, Benjamin Jaffe’s howling saxophone the emergency siren ringing throughout, a mutant variation on the familiar X-Ray Spex/LiLiPUT strain of punk history.

Veronica Torres’ lyrics are ready for every fight: late capitalism, female rights (“In a crusade over who owns the right to my body / What am I allowed to create or destroy?”), right-wing media, post-truth, you name it. The delivery is sharp and staccato, maintaining composure against the deluge of horror.

The album title itself is an encapsulation of the end times and at points Pill sound like the bloke from Munch’s The Scream leapt out of the frame and moved to Brooklyn. But, then, perhaps this is how we should all be reacting. This band took a breath after the 2016 election, looked inward and outward and found inspiration in the carnage. One of the punk albums of 2018.