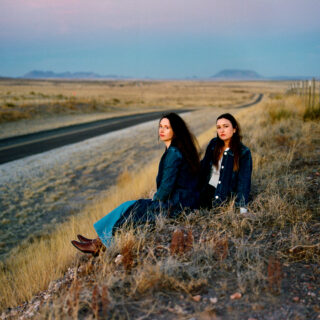 Watering the dead grass, driving the long and winding Texas roads, hanging up wet laundry on a clothesline with rusty pegs and looking out to the great expanse; there’s nobody around for miles. ‘Abilene’ focuses the debut album by Plains – a new songwriting collaboration between Jess Williamson and Waxahatchee’s Katie Crutchfield – magnificently. The lyrics ache for the simplicity of a coffee shop or a liquor store, while musically we waltz through the tired tropes of alt-country and Americana that feel strangely rejuvenated here. There’s a musical tug-of-war between sorrow and battered determination, and a melancholic ambition that distances the pair from their hometowns, in a mournful ode to the culture they’ve longed to break from: “Texas in my rear view, plains in my heart.”

It’s strange to hear these voices recontextualised, if only because Waxahatchee’s Saint Cloud felt so grounded in home that moving that concept elsewhere underlines the escape for which I Walked With You A Ways is pining. You can feel the wind blowing through these songs, nodding to the melodramatic truisms of country music – the boy with no name, the last two on earth, your lover’s face in the sunset – in a way that makes it a vocal twang away from Alan Jackson. “I’ll be a martyr to whatever your heartache will be,” they harmonise in ‘Bellafatima’, before glimmers of electric guitar encroach on the acoustic ballad ‘Easy’ like gently twinkling stars and the title track closes the album like a perfectly resolved book.