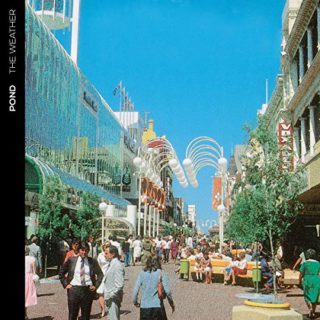 How does an Aussie psych band stand out amongst the Bland Realms, the King Gizzards and the Tame Impalas, especially when you’re formed of members of the latter, but not Kevin Parker? Where others (i.e. me) would have had a total identity crisis, Pond have kept their heads to simply enjoyed the thrill of jamming out some thick-ass riffs.

On ‘The Weather’, they’ve stepped outside their comfort zone to make something… political? This project is being pushed as a thematic album based “on all the weird contradictory things that make up a lot of colonial cities.” Swirling psych riffs + social commentary? YES PLZ. Sadly, it’s mostly business as usual, with dismal news bulletins spliced throughout to tie the noodling together. Though tangible, textured and constantly propulsive thanks to well-oiled musicianship, sluggish songwriting means the album fails to reach its ambitious premise. ‘AB’ is pure King Gizzard worship; ‘Edge of the World’ parts 1 and 2 turn into ballad soup almost immediately.

The lyrics are a saving grace. On ‘Sweep Me Off My feet’, Nicholas Allbrook comments on gender anxiety with quick wit, fear hiding behind a nasal yelp: ‘I’m not him / Between my penis and my chin is Camembert and shame / I used to be elegantly thin.’

The album fully realises its panic and frustration on ‘3000 Megatons’, a lighter-wielding call for the apocalypse with a climax that’s swallowed whole by bass and reverb.