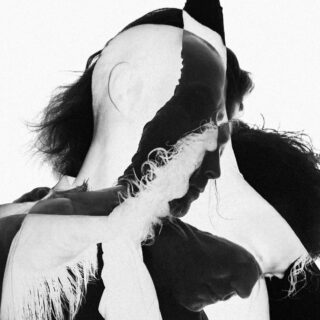 Throughout their criminally underheard decade-long career, the group has taken the encroaching alienation and desolation of our times and spun the most pummelling and intense songs possible from them. Songs that displace, disrupt and disguise themselves to find a way to get right to the bone.

The band’s sublime 2014 debut album Viet Cong deconstructed melodic post-punk to its elemental core before flinging it all back together into a Mad Max-like scrapheap. The tightly-tuned guitars erupted like claps of thunder as they tumbled from the summit, while the drums stampeded through like the march of dead rising from their graves. Within the mayhem, vocalist and bassist Matt Flegel’s supplications sliced through like a scythe. The 11-minute closer ‘Death’ is still unparalleled in its combustive unrelenting shell-shocked reckoning.

The more ruminative follow-ups, 2016 album Preoccupations and 2018 album New Material, were as inwardly ambitious as Viet Cong was outwardly ambitious: the instruments were entirely different this time around; the perfectly-dosed glacially-clear electronics were precise, whereas before the guitar hooks had been rusty and unsanitised. Where gangrene hitherto grew on the extremities of verses, now couplets were surgically stitched. It radiated the sense of a butcher doctor trading in his tools for a more sophisticated science.  However, don’t mistake anything, the prognosis of the songs remained the same: everything is absolutely fucked. We are all absolutely fucked.

In many respects, it’s this journey as a band exploring the psychology of its own sound that we witness on their newest LP Arrangements. There’s a pleasing, albeit demented, pathology at play. The sound of a band seemingly turning the scalpel briefly away from society and aiming it in their own direction. What bleeds out feels like a classic two-sided record. A grotesque Frankenstein’s monster of a thing.

The first four tracks share its DNA with the stampeding and sublime guitar-driven rock of their Viet Cong days. Opener ‘Fix Bayonets!’ is a swerving assault of razor-sharp strings, awash with guitars that wail like screaming sirens. The arrhythmic drums that beat through the verses are chaotic. The melodic upheavals are suitably seismic, with vocalist Matt Flegel’s voice bellowing through like unanswered cries through an emptied asylum.

‘Ricochet’ is the type of dark surf rock that emanates from The Beach Boys’ Surfs Up and The Doors oeuvre and haunts much of North American art-punk from the late 2000s and early 2010s, with Japandroids, No Age, Ought and Wavves all afflicted. Music inspired not from riding the waves, but from walking right into them.

The last three tracks are the David Bowie Low-like shift from rock ‘n’ roll foundations to something more amorphous. ‘Advisor’ is drowsy and tantric. The slurry vocals lost in the conflicted sound, with bottomless over-laid strings, echoing hi-hats, and silences battling one another under the guidance of the track’s polestar bass. ‘Recalibrate’ is a screeching industrial wallop. Full of loose strings and drums that sound ten tonnes heavier than anything else. The hay-wiring electronics pulsate like Solaris’ sunspots, with the visions conjured terrifyingly warm. All charmed by the baritone bark of Flegel. It’s an irrepressible textural overload that perfectly mirrors the melodic mayhem found in the earlier tracks.

If the lyrics of closer ‘Tearing Up the Grass’ weren’t so annihilating and sombre, you might be forgiven for thinking the album ends on a positive with its perky chords. Instead, hidden in the wilting flowers is Flegel’s grand statement that he has preached since time immemorial, summised in one deft line: “The place we are looking for isn’t on the map anymore.”

While much is made of the sci-fi imagery conjured up by Flegel (in a similar vein to Ian Curtis’ J.G. Ballard inspiration), it’s the darker, more hopeless dead-earth fantasy of The Book of the New Sun author Gene Wolfe and Dhalgren author Samuel R. Delany that is felt across Arrangements. A land of lost symbols, rediscovered by a detached being that feels a lot like a human but has none of the memory. A hopeless crusade across a scorched world, where the only hope is that the systems will make sense again. Will enslave us once more. Being marginally better than the bleak certainty of nothingness.

The two sides to Arrangements are like a draining binary star in that respect, each sucking the energy out of one another, each bringing about their own life and their own end. Components unconsciously working together to deliver an absolution. Its own wild manifesto. Not much touches the depth of what Preoccupations is willing to subject here to sound. To be honest, not much can.