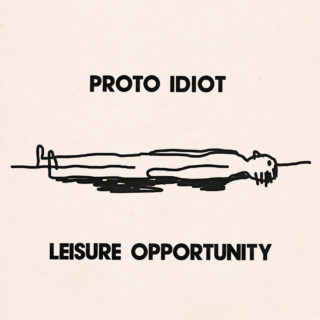 Manchester’s Proto Idiot don’t play their instruments with knowing proficiency, acting as antidotes to their perfectly poised contemporaries: “I can’t even play guitar!” declares a self-depreciating Andrew Anderson on opener ‘Theme’, a track that embodies the band’s wry sense of humour and rejects musical earnestness. Anderson’s charisma is atypical of modern punk bands: live, especially, he’s an enigmatic, lively force, and anything but self-effacing. Here, his presence shines. Vocals veer from abrupt to outright abrasive, a quality that’s comparable to Colin Newman’s voice. Indeed, most of ‘Leisure Opportunity’ sounds informed by early Wire.

Despite the occasional existential themes (see ‘Finally Have To Face Myself’) and the obvious contempt on ‘Angry Vision’ and ‘You’re The Kind of Person’, any hint of outrage is depicted with light-hearted dejection and counteracted by a propensity for melody. There’s no pretence with Proto Idiot: ‘Leisure Opportunity’ is free of embellishments. It’s punk music as it should be, at it’s most primitive: pissed-off and puerile, messy and restless, but full of charm.