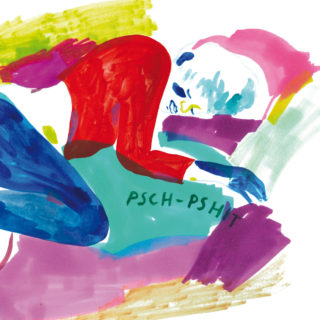 A feminist collective stripped to a duo, made of a former couple: this is a brief the story of Psch Pshit’s second coming, a Lyon via Venice electronic outfit back on the scene with ‘Parfait et Impudique’ after splitting up in 2012. Their multifaceted worldbeat melds industrial, synth pop, techno and psychedelia in an obscure and charming sound: a mix of Chicks on Speed, Goat and Cocorosie. At times, their French vocals remind of Asia Argento ventures with Brian Jonestown Massacre, as in the opening ‘L’Ancêtre’, while English tracks like ‘Derailing’ fly straight to the darker side of New Wave and World Music, evoking some wicked ritual.

‘M’ sounds like a love dedication to the namesake Fritz Lang monster; ‘Cochonne’ and ‘Phoenix Autruche’ are hardcore nightmares that mark the end of this descent into hell. Not even being presented as “songs of love and sexual desire” washes away the eerie and spooky mood of the album – an all-round collection of the most occult sides of feelings, perfect and shameless.