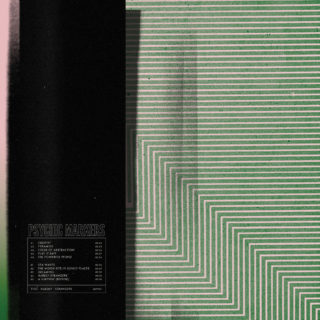 You’d be forgiven for thinking that Psychic Markers had dropped off the face of the psych-rock planet, as it’s been almost four years since the London band emerged with their dreamy debut album ‘Scrapbook No. 1’. During this period of absence though, the quintet have hardly been inactive, instead devoting their time to tinkering with their other projects including Still Corners, My Sad Captains, Great Ytene and Grass House.

They’re back together now though, and the aptly titled ‘Creepin’ kicks this second outing off in ghoulish, gothic fashion. That mutates into the sharp synths and churning beats of ‘Pyramids’ where Steven Dove’s vocals, like a lonely voice in the shadowy night, layer on top of a krautrock song that’s simultaneously moody and danceable. Up next is the reverb-soaked ‘Fields of Abstraction’, a track that grows more engulfing with each sitting and the experimental post-punk of the title track reaches for an epic climax.

Sadly, elsewhere they struggle to maintain the same chemistry. The pastel melody of ‘Dreaming’ and ‘The Powerful People’ come across as uninventive and unenthused, while the remaining tracks drift by with few distinguishing features.

While there are moments of promise, and given their collective minds, ‘Hardly Strangers’ could do with a bit more effervescence.