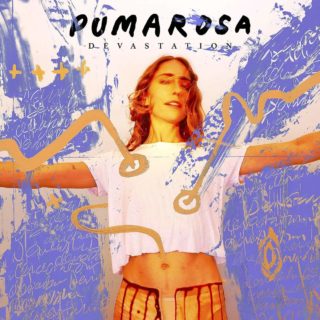 “Sometimes I fuck shit up just to check that I’m breathing,” intones Isabel Muñoz-Newsome on ‘Lose Control’. It’s a striking line that, combined with multiple lyrical references to falling apart, allude to the singer’s personal experiences in the wake of Pumarosa’s 2017 debut.

Diagnosed with cervical cancer, the relationship with her body altered as the band reconvened to write Devastation. Changes were also afoot within the London outfit, with bassist Henry Brown departing (to be replaced on this release by Tool’s Justin Chancellor).

Both of these ordeals led to a reassessment of their direction. Bored of guitar music, they sought inspiration from Aphex Twin and old jungle tunes. It’s a transformation that’s obvious from the opening notes of their second album, with ‘Fall Apart’ combining drum and bass with brooding synthesiser.

This sets the template for the remaining ten tracks, which swing between the pop sensibility of ‘Heaven’ and the more rock influenced ‘Into the Woods’. It’s when they’re at their darkest that they’re most convincing: the semi-industrial drones on the smoggy ‘Factory’ and the sultry jazz on the saxophone driven ‘Adam’s Song’.

Underpinned by Nick Owen’s precision playing, which sounds more like a drum machine, the boundary between organic and electronic is further blurred by Muñoz-Newsome’s vocals. Slightly mannered, her control reins in the emotional impact and is processed on occasion.

This all means that if their debut was, according to The Guardian, the “missing link between Joy Division and Pendulum,” then Devastation is the bridge between Pendulum and Red Snapper.